The City of Waterloo, Ontario, Canada is responsible for the distribution of water to over 137,000 customers within the Regional Municipality of Waterloo. The distribution system is divided into 7 areas, with over 441 kms of watermains consisting of ductile iron, PVC and CPP pipes with the oldest pipes dating back to the late 1800’s.

As part of proactive program to identify leaks as they develop, rather than waiting for a catastrophic failure, the City obtained funding from the Canadian Water and Wastewater Fund (CWWF) to implement a new patented technology from Digital Water Solutions Inc. that allows the City to collect pressure, capture transient pressure events, acoustic data, and water temperature from sensors located below the valve of a dry barrel fire hydrant. The configuration allows the fire hydrant to remain in service and data to be collected year-round as there is no risk of freezing a charged fire hydrant in cold climates.

Under the project the City identified several areas where the fire hydrant insert kits would be valuable for monitoring of the distribution system, helping the City better understand the distribution system and the events that occur underground. A total of forty (40) units were installed in City designated areas 3, 5, 6 & 8. Each area was selected because of a history of leaks/breaks and the opportunity to test the units on differing pipe materials.

While the sensor units are intended to be semi-permanent installations, they can be uninstalled and reinstalled in less than two hours, making it possible to relocate units should the City wish to move the units to another area of the distribution system.

To date, the project is a success. The City was able to identify four events in the system using the installed sensors confirming
the validity of the instrumentation and the value of the units.

The first event was the detection of a significant drop in pressure from a watermain break approximately 6 km (direct line) from the fire hydrants outfitted with sensor units. The leak was a direct result of construction activities where a watermain was ruptured by a backhoe. Figure 1 shows the pressure results from 8 sensors before, during and after the break on the morning of April 25, 2019. The break created a leak of 10M liters of water and was repaired April 26 and returned to service on April 29. 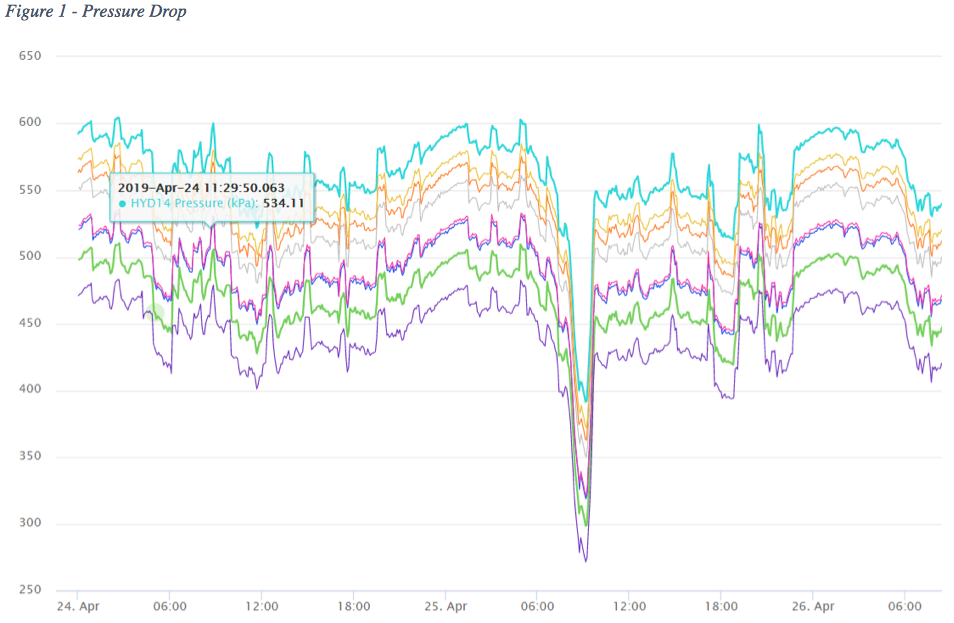 The second event captured another watermain break, this time the break occurred within the area where the units are installed (identified as Area 6 as shown in Figure 3). This event was captured by the acoustic sensors during overnight monitoring periods with the data results displayed on both scatter plots and acoustic data pages. Figure 2 shows the break using scatter plots that display the current daily results with summarized past results. Figure 3 displays the acoustic data available to users.

Event 3: Elevated Tank out of Service

The next event highlights how the technology can be used to explain system anomalies other than main breaks. In Waterloo, the Regional Municipality of Waterloo operates the water treatment, pumping and storage facilities. When the Region took an elevated tank out of service, the instrumentation in the City’s system immediately recorded a change in the distribution system pressure. In Figure 4, users could easily see the change in the system pressure variance with a large buffer in the system (the elevated tank), represented by the dashed line, in contrast to a distinct pressure response that closely tracked with the pump starts and stops occurring at the local pump station, the solid line.

The final event demonstrates the sensitivity of the devices. A small ‘leak’ was detected using the acoustic data within the area monitored overnight by the units. An investigation discovered the event was an individual filling their swimming pool using a garden hose. The flow rate detected was between 20 and 25 liters per minute. The City was excited to learn that the units were capable of detecting small leaks within the distribution system and know they will benefit from the alerts the system can send to the operations team when a leak this small occurs, hopefully preventing a catastrophic event.

As part of the solution the system is looking for patterns within the data to advise the City that events are occurring that require further investigation. One such pattern is seen in Figure 6 below, showing acoustic noise at the same time of night approximately every 10 days. This pattern is indicative of a repeating event within the system, most likely in this case a lawn sprinkler system that is programmed to operate at a specific time of day. 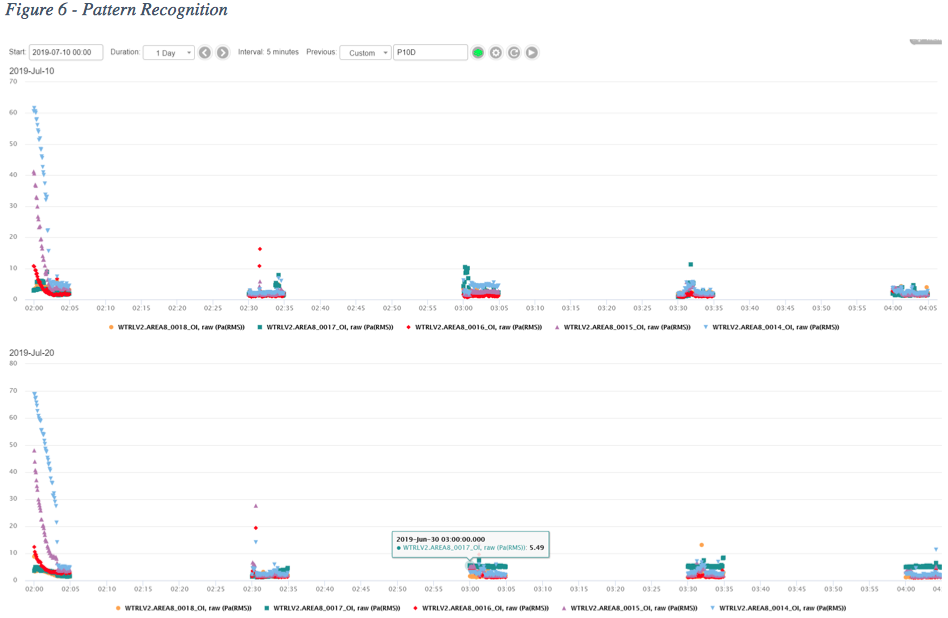 To date the City has obtained the results that they were hoping to achieve, being able to monitor pressure, transient pressure, acoustics (leak detection) and water temperature to gain greater visibility into their water distribution system and a deeper understanding of how various events impact one of their largest unseen assets. The hydrant.AI system helps with automated leak detection and provides useful information to the city for future planning.

Thank you for your interest. Fill out the very short form below and we’ll get back to you quickly to arrange a demo.

Thank you for your interest. Fill out the very short form below and we’ll get back to you quickly with the spec sheet.